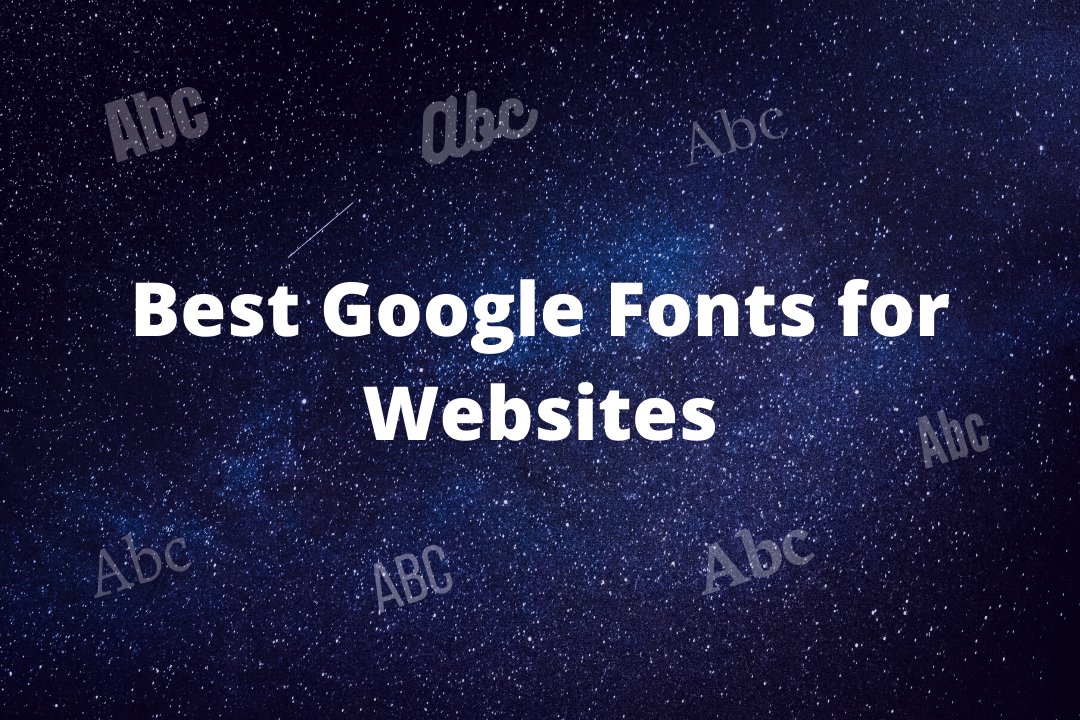 In this post discussed about best google font for website. Having a world-beater of a website relies on very many aspects. It would be very ignorant of anyone to think that typography is not on the list of these aspects. In fact, it ranks very high in terms of importance. The font of a website has a significant impact on the conversion of a website.

Sure, you’ve visited a website and just thought about how terrible its font looks. It is, however, a rare occurrence to visit a website and just love its font. If a website has unattractive and hard to read font, visitors won’t hesitate to leave. The site even feels amateurish and presents your business badly. When your font is appealing to your visitors, they may not notice it much, but it will attract them to read your content. It is then up to you to further stimulate conversions with good content and a stellar website. Allow us to help you craft a website that fulfills all the goals you’ve set for it with a selection of the 20 Best Google Fonts for Websites, 2020. Choose the best font for your site.

Open Sans is a sublime font that will look its best when you use it in headers with the semi-bold variation option. With a crisp and noncryptic outline, it is very legible. You can mix things up by using it for your headers and then writing the descriptions or elaborations using another close font, such as Helvetica Now. You can also rearrange them and use Open Sans in the body, and an emboldened Open Sans for the headers.

Launched in 1983, Neue Helvetica quickly rose to beat other fonts from then and is still a force to reckon with, years later. It’s very different from the traditional Helvetica with a smoother appearance that blends into any background. It is perfect for bold, uppercase, and regular, therefore, making it an ideal choice for headers and descriptions.

Brought to life by Jasper Morison and Naoto Fukasawa, Untitled Sans is a plain Neo Grotesk Sans. Its complementary typeface draws its inspiration from the old-style genre embodied in close to all metal type foundry of that age. It has a timeless look that is quickly becoming a favorite for many top-tier websites.

PT Sans is a 2009 font based on sans serif types from the second half of the 20th century but with a modern feel that makes it one of the best ways to display your content. With this font, you can go from an intense and expressive feeling to a sophisticated and reserved one seamlessly. The family boasts 4 basic styles, 8 styles, 2 narrow styles for economic type, and 2 caption styles for smalls sizes. PT Sans incorporates standard Western and Central European, as well as Cyrillic code pages. Furthermore, it has the characters of all title languages in the Russian federation. Its styling is a blend of a subtle ambiance and a shade of extra space.

With the versatility that comes with Roboto, you can’t go wrong. It has a dual nature. On the one hand, it has a very mechanical core, and its forms are mostly geometric. On the other hand, the font has open and friendly curves. It doesn’t compromise its letterforms. Instead, it allows them to settle in their natural widths. These qualities interpret into a fluid reading rhythm that is common among serif and humanist types.

Despite the DIN typeface always being tempting, it has been challenging to choose with its limited range of widths and weights. However, DIN Next has come to the rescue in the timeless and flexible Sans Serif. With its previous classic fee, DIN Next has seven weights ranging from black to light. Each of these weights has a matching italic and condensed counterpart. DIN Next has old-style figures, small capitals, superscript, subscript, and a few other alternate characters.

Playfair is a font design that has a transitional design after evolving from broad nib quill of the 18th century, through print letterforms to morphing into a variable font in 2019. Since it is a large display design, it is best for headers and goes well with the body texts of Georgia. If you have a WooCommerce shop, you can utilize this pairing or opt for an even more sophisticated Playfair – Montserrat pairing.

Montserrat was inspired by the old signs and posters of Montserrat, Buenos Aires. Julieta Ulanovsky designed this typeface to rescue the beautiful sanctity of urban typography of the initial part of the 20th century. The letters show work, care, dedication, light, color, contrast, life, night, and day. They are a reflection of the beautiful city.

Lora is a striking modern serif with a history in calligraphy. Its typeface has a distinct moderate contrast, that is perfect for body text. Write a paragraph in this font if you’re looking to imprint it in the minds of your readers. Lora is the ultimate vessel for an artistic and contemporary story. Its make is born for screen appearance and does just as well in print.

In the last ten or more years, Lukasz Dziedzic has designed amazing fonts inspired by a difficult task he had to solve. Lato was no different. It was initially intended for a large client who needed some corporate fonts. The client didn’t prefer taking Lato, so it was released to the public. The typeface appears transparent in the body text but shows some of its original traits in larger text. The classical proportions Lukasz used always bring elegance and harmony to letterforms. The letters are semi-rounded for warmth, along with robustness and seriousness.

Source Sans Pro is a more corporate-style sans serif Google font. This font created by Paul D. Hunt has an incredible 12 styles and weights ranging from heavy to extra-light. The font is very professional but not as exciting as others. If you want a typeface for an education website or something very formal, Source Sans Pro should be a font in your consideration.

Natanael Gama created Exo as a Kickstarter project, but the font was later released for public use. Exo is a modern geometric font that has 18 styles. This much variety ensures that you find the perfect weight for your needs. However, if you want to use it for minimalist text, it becomes a little hard to read. We can attribute this to its many curves and shapes in its letterforms.

Exo 2 is another Great google font for website based on Exo 2, with a few distinctions. Despite being very similar to Exo, it is much more legible in smaller sizes. If you want to use your font in body text, this font is a much better option than the original Exo. This version has improved legibility while maintaining the attractive particulars of Exo.

Dalton Maag created Ubuntu for the Ubuntu operating system. This font is a popular humanist font known for being very rounded and original. By the distinction that most curves meet at the stem directly at the end clearly shows that there is no sign of any ear or serif. Ubuntu has various weights ranging from light to bold and has eight styles. If you want a monospaced or condensed font, Ubuntu has these variations with Ubuntu Mono and Ubuntu Condensed.

In 1990, Adobe released Minion, which is a piece of gorgeous work by Robert Slimbach’s. It drew its inspiration from the renaissance-era type and was meant for body texts rather than headers. The serif typeface has been becoming a regular in countless editorials everywhere. It looks set to claim the loyalty of magazines and blogs.

Istok Web was created by Andrey V. Panov and only has italic, bold, and regular versions for its weights. If you want a font that spoils you for choice in the way of weights, you might want to make another choice. However, Istok Web makes up for a lack of weights with a relaxed yet professional typeface. It has excellent legibility when used in large and small texts.

Avenir Next Pro was born of the collaboration of Adrian Frutiger, Avenir’s creator, and Akira Kobayashi. With a new perspective on the classic, this font takes the original concept and revolutionizes with unbelievable results. This 32-font collection offers variety with standard styles ranging from heavy to ultra-light. The fonts have the unique ability to work harmoniously with countless modern serif bold types. The family has a clean, simple, and does wonders in headlines and copy blocks alike.

Nobile is another google font for website that is light in weights but is otherwise spectacular. It has 2 weights and 4 styles only. However, Nobile’s design is perfect for all digital screens. Even when the text scales down with handheld devices, this font doesn’t lose its distinctive look or its legibility. The font functions well in body texts and headers alike. On larger displays, it is exquisite too.

Another one by Natanael Gama, Cinzel is a beauty to behold. Like the rest of his fonts, this one is inspired by early typography and Natanael’s bold experiments. It is inspired by the 1st century roman inscriptions and is based on classical proportions. Even though it brings with it the ancient history of the Latin alphabet, it was built for modern needs with a contemporary feel too. Cinzel has only grown in popularity each year, and 2020 should be no different.

Initially created by Vernon Adams, Amatic SC featured both Latina and Hebrew alphabet. It is simple but effective and is excellent for titling and small runs of text. Like Cinzel, it looks gorgeous on all browsers of all device sizes. After Vernon Adams and Ben Nathan created the Latin and Hebrew design, the latter revised the Latin design. Afterward, Thomas Jockin respaced and adjusted the character spaces of the entire font.

If you need the best google font for website, any of the fonts in this list will do a fantastic job. On the other hand, if you want to refurbish your older site, you can select the best font for your website. Make your choice and break a leg!

Number of items in cart: 0